Millions of people in Zimbabwe received text messages informing them about ongoing mass drug administration (MDA) programs for NTDs as part of a partnership between Econet Wireless, Higherlife Foundation, the END Fund, and the Zimbabwean Ministry of Health and Child Care.

The Ministry of Health and Child Care launched its 6th MDA campaign for 2017 on October 30th to treat people with lymphatic filariasis, schistosomiasis and intestinal worms.

These diseases can cause severe pain and long-term disability. Amongst children, infection leads to malnutrition, cognitive impairment, stunted growth, and the inability to attend school. Adults can suffer from social isolation, inability to work, and anemia, which significantly increases the risk of maternal mortality. In 2016, approximately 10 million people required treatment for one or more of these diseases in Zimbabwe, according to the World Health Organization.

Instead of diagnosing and treating specific individuals, mass drug administration campaigns are used to provide treatment to large populations at risk of these diseases. Providing people with proper information is crucial to increasing the participation in MDAs.

Econet Wireless, Zimbabwe’s largest telecom company, sent text messages to people on their service to raise awareness about these neglected diseases and inform the population on how to receive treatment. One text read: “lymphatic filariasis/elephantiasis causes swelling of legs, arms and genitalia. Visit the nearest clinic for free treatment from 30 October- 4 November 2017.” 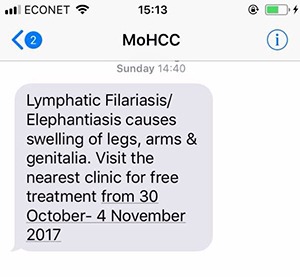 “Just being at the MDAs and talking to people, some would say that they heard about it from an SMS message on their Econet line,” says Eve Gatawa, a partnership coordinator in Zimbabwe working on the campaign.

This is the second year of this partnership with Econet Wireless and Higherlife Foundation. More than three million messages were sent during the 2016 campaign.

More than seven million people are being targeted for treatment for one or more of these diseases as part of the Ministry of Health and Child Care’s 2017 MDA campaign.